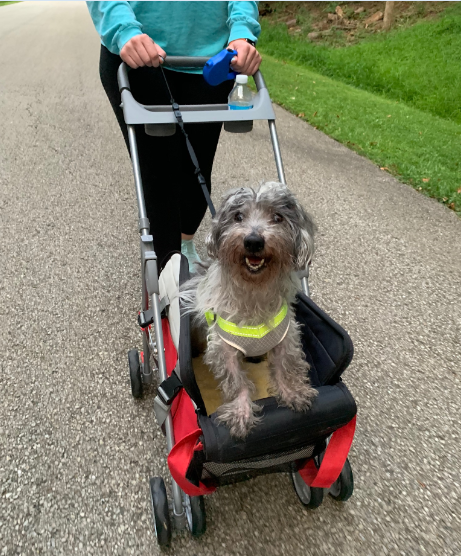 Chip was born on March 10th, 2009 in a small rural area of Ohio. I remember the day we brought him and his brother home, they were so small they could fit in the palm of my hands. Since day one, I knew Chip was special and we had such an instant loving bond. He was so charismatic, sweet, loyal, and an incredible blessing in our life. Although he faced multiple chronic health issues throughout his life, you would never know it because he always had a smile on his face and was ready to play. Some of his favorite activities were playing with rocks (I know, it’s so odd and I’m not sure how that started), playing with toys from his toy bin, eating a cheese hot dog from Skyline Chili, and being outside in the yard or going on walks. Whenever Chip and I would go outside, I would pick up a handful of rocks and toss them and he could chase after them and always bring it back. He had the best sense of smell of any person or animal I’ve ever met. Even if I touched the rock for less than a second and threw it into a pile of similar looking rocks, he wouldn’t come back until he found that exact rock. Chip’s love for life was contagious. After I would get home, he was always so excited to see me and he would run into his toy bin, pick out a toy, squeak it, and then I’d chase him around the living room and kitchen trying to catch him. He’d eventually slow down (he was much faster than me) so I could catch him and we’d play tug of war with the toy. Eventually, after he got tired, we’d sit together and it was those precious moments I’ll cherish forever. Chip was a fighter and never gave up even when he could have countless times. He is one of the most beautiful gifts I will ever receive and we will never stop loving our sweet sweet boy with those big brown eyes and heartwarming smile. To my Chip, I love you more today than I did yesterday, and I’ll love you more tomorrow than I do today. You are in our hearts always and forever.