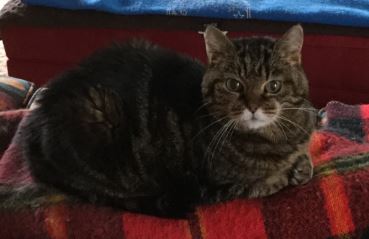 I met Giselle in mid-November 2008.  I’d seen her photo and bio in the shelter’s newsletter several months before.  She was a beautiful, petite, big-eyed classic tabby who was brought to the shelter as a pregnant stray and lost her babies there.  She was at the shelter for about 8 months and was believed to be almost 4 years old.  I wanted to see all of the cats and kittens so I went through the “cat rooms” one by one.  I stopped for a few minutes when I saw Giselle to pet and talk to her.  Then I went through the rest of the “cat” rooms.  Every time I passed her room, I looked in the door’s window, and every time she was looking right back at me.  We chose each other that day.  I took her and a 9 year old tuxedo cat, Rocky, home with me.

Giselle blossomed very slowly.  Initially she let me pet her some and of course, capture her when necessary to take her to the vet. She was not a lap cat and did not like to be handled.  After a few years, she decided she liked to be brushed and also started to allow me to kiss her on the head.  She was the most social of my three cats.  Her two “brothers” would disappear when the doorbell rang, but Giselle would follow any guest around the house.  I used to “chat” with her often and point out things on the TV, like baby hippo Fiona, to her. She loved Rocky and he tolerated her. She cuddled up next to him whenever she could.  She learned how to play with toys and how to sharpen her claws by watching him, even though he had no front claws.

Eventually Giselle allowed me to pet her while she ate and to kiss her on her body.  In the last year, she even tried to “kiss” my face several times.  I knew she trusted me then and even liked me as much as I loved her.  I was Giselle’s “mom” for almost exactly 9 years, and wish it had been several more.  I think about her every day.

My last three cats, Annie, Abby and Giselle, were all diagnosed with lymphoma in the last twelve and a half years. They were not related.  Sadly, there have been no advances in treating felines for this horrible disease.  It almost makes me afraid to adopt another female kitten or cat.  I hope that much more can be done in the near future to at least allow felines to live 9-12 months after a lymphoma diagnosis.